Charlotte is Regional Health Manager at Mowi Scotland and holds an MSc in Aquatic Veterinary Studies and BSc in Marine Biology, in addition to her vet degree from Bristol University.

What inspired you to first become involved in aquaculture?

I was first inspired to become involved in the world of aquaculture in 2013 during an industry field trip as part of my Masters. We visited Mowi Loch Ailort RAS which was in construction at the time and the imminent rapid growth of the industry blew my mind. Everyone I met on that trip had an incredible passion for fish and aquaculture and I was inspired by the fact that this industry was talking to and welcoming me and other young graduates. At the end of the trip Dave Cockerill spoke to us and until then I hadn’t met a fish vet. From that point I saw a future for myself as a vet in aquaculture.

I qualified as a vet from Bristol University in 2011 and embarked on a year in mixed animal practice. Having studied Marine Biology in the 4th year of my vet degree I knew that long term I wanted to pursue a career in fish. So, after a year of cats, dogs, cows, sheep, horses and lizards I decided to pursue my passion and undertook the Masters in Aquatic Veterinary Studies at Stirling University. Following the Masters, I worked at Tesco head office for three years as the Aquaculture Manager where I advised the buying team on farm animal welfare and farming standards. Working at the consumer end of the supply chain was fascinating for many reasons, including understanding the markets, ethical buying practices and consumer decision making. I headed to Mowi in 2017 to be closer to the fish and with the motivation to have a more direct impact on the everyday welfare of fish. I have been at Mowi almost three years now as a Regional Health Manager. In this role I have responsibilities to ensure the health and welfare of fish which involves health surveillance checks and investigations, delivering training and optimising farming practices alongside Mowi colleagues. 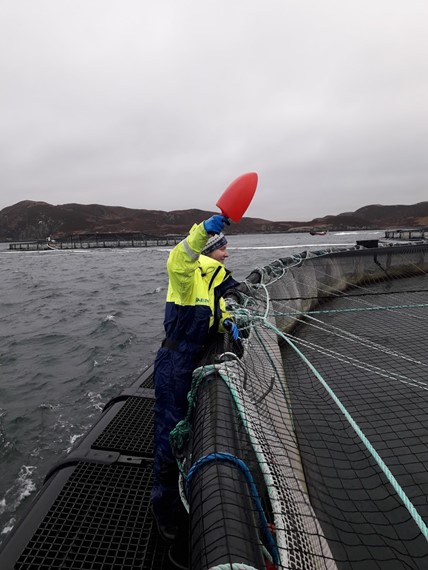 Are there any individuals or organisations in aquaculture who you’ve found particularly inspirational?

There have been many inspirational people along the way, and they all play their part. I have recently become a parent and I have a newfound appreciation for parents in general. Meritxell Padrisa, Production Director at Mowi has inspired me with her dedication to the job and always being available to discuss fish, no problem too big or too small. I always try to hold myself to her standard of taking the time to listen to others and help when they ask for it. Britt Sandnes is a special person who I had the privilege to live with in the Western Isles. Britt brings sunshine to farming wherever she goes whilst being a brilliant, hard-working mum of three. I try to channel Britt and remember to see the sunny side of things. The farmers I work with inspire me every day. They are at the frontline, in all the elements trying to do their best for the fish. Sometimes we agree, sometimes we don’t, but they inspire me to do better.

How important has networking been to your career?

Networking has been hugely important in my career. My first vet job was at a practice where I had previously done work experience. I had worked with Gideon Pringle when I was at Tesco and he at Dawnfresh and then he interviewed me for my current job. As a vet student, you are constantly doing work experience and on long car journeys to calvings where you have to speak one to one with the people that you look up to. I learnt to develop a rapport with those individuals and often I was sussing out if I would like to work at their practice. Cake was often involved too. This is a skill I draw on now and encourage others to speak to the people who interest you, what’s the worst that can happen?

For many women trying to move up the career ladder they can be met with inequality challenges. Can you give an example of a discriminatory situation and how you dealt with it or how to avoid it?

As a vet student you are a commodity, four females to every one male. When I went into farming and aquaculture, I quickly spotted a stark difference in the balance. As a vet student, I was inspired most by one farm animal vet who looked a lot like me only smaller and she was awesome at her job and all farmers requested to have her at their visits. Until then I had written myself off as too small or not strong enough, she taught me that I bring the knowledge, expertise and technique to best do the job and ask the farmer to help if a stool or extra muscle is required. This helped when, in practice, I would hear the farmer ring the surgery and say “any male vets in today?” and I would visit and be determined to prove to them that I was the person for the job. In aquaculture it was easy to see that the majority of people in the industry happen to be male. This motivated me to bring something different to the conversation, although I did take a while to find my voice as I struggled to believe that I had anything of value to say when everyone around me was so confident. I soon learned that by speaking up I had lots to contribute and the more I did the more confident I became. So now when I am in a room and happen to be the only person who is female I see it as an opportunity to speak up. There are still everyday challenges, for example in PPE, facilities, recruitment, policy, but the industry is young and good at adapting to be more inclusive. Whilst we can wait for change, I do believe that we have to continue to request the changes that matter to us as often, they may not have been thought of before because historically the decision makers have not had the same needs.

There are times when inappropriate things are said. As much as possible I try to stop the conversation and call it out as being inappropriate or point out the fact privately one to one. Both are tough but necessary. It would be nice to get to a point where you no longer have to correct others.

My proudest achievement in aquaculture is working out on the Western Isles as the Regional Health Manager at Mowi, caretaking the health and welfare of many fish alongside some brilliant farmers. Another achievement is establishing surveillance and diagnostics to understand the pathology related to anaemia in salmon.

Where do you think the focus of the industry should be in the next decade?

We have to improve how we combat lice in a way that best preserves salmon welfare and does not impact on the environment.