Laura grew up in British Columbia, Canada and completed a PhD at the University of Victoria with Dr Ben Koop and co-supervisor Dr Simon Jones, investigating mechanisms of resistance among salmonids to salmon lice. She then moved to Prince Edward Island to join Dr Mark Fast's lab as a post-doctoral fellow at the Atlantic Veterinary College (AVC); continuing sea lice research but also expanding focus in salmonids health to virus and bacteria that plague the aquaculture industry. Laura is now the Program Lead in Molecular Genetics and Biotechnology at AquaBounty Canada, a company that utilises biotechnology as a tool for innovative solutions for aquaculture. As adjunct professor with the Department of Veterinary Medicine at the AVC, she is in the process of integrating academic research with industrial collaborations to create a discovery pipeline for sea lice control.

In one word, serendipitous. All euphemisms aside, my career has absolutely NOT manifested into what I had originally “planned” it to be. From about 8th grade I was dreaming of being a neuroscientist!! I was always a lover of fishing and animals, but my sights were set firmly on medical school. It wasn’t until late into my first BSc degree that I met a particularly passionate parasitologist who opened my eyes to the stunning diversity of parasites. It could be said that was a pivotal turning point in my life – from there I realized that my passion was not in humans at all, it was with investigating the spectacular adaptation and diversity of host-pathogen relationships. I happened to take a summer research job studying salmon lice which really got me hooked (pun intended). From there I accepted an MSc position as part of a large multi-year research grant studying sea lice and the rest is history!! Graduate school was the best decision of my life. I was given freedom to ask the questions I was interested in and develop my own hypotheses, and this was pretty exhilarating.  I was (am!!) so passionate about my research, and as an added bonus I got to travel all over the world to give presentations about it. After my PhD I had my sights set on a post-doctoral fellowship, either in the UK or Norway, or maybe even Chile – there were so many excellent salmonid researchers to consider! When Dr. Mark Fast asked me to move across Canada to join his lab I literally jumped at the opportunity. And serendipity struck again – during my second post-doc I was recruited to work for AquaBounty. Since early on in graduate school, my research made it pretty obvious to me that advances in biotechnology would be the major driver for the development of novel strategies for salmon lice control. And this tiny little island (Prince Edward Island) happens to host the largest bioscience community per capita in all of Canada with AquaBounty being one of them! I’m now leading a team in molecular genetics and biotechnology, where we are using innovative tools to devise sustainable solutions for problems that the industry faces. It is a pretty amazing position with lots of room to grow and the freedom to research the things that I’m passionate about, including sea lice of course!

Are there any individuals or organisations in aquaculture who you’ve found particularly inspirational?

I can say with 100% certainty that there are several key individuals that were instrumental in influencing my career path but for brevity I’ll only mention the top three that come to mind – first and foremost, that passionate parasitology professor from Vancouver Island University, Dr. Tim Goater – his enthusiasm infected everyone he taught, and it was really the spark for me. Spectacular diversity, batman! Secondly, would be my graduate advisor and supervisor, Dr. Simon Jones. Simon is a recognized world expert in salmonid parasitology and health, and I was SO fortunate to have had his guidance over the years during my PhD. He really pushed me to be my best while letting me make my own mistakes – the only way you can really learn as a young scientist. Finally, I have to say that Dr. Mark Fast was extremely influential in where I am today. During my graduate career, I read his publications with great enthusiasm and tried to follow up on some of the questions his research generated. He was a young, ambitious scientist and was doing some pretty fantastic stuff. So, it was pretty spectacular when he offered me a post doc in his lab!! I didn’t think twice, moved across Canada to this tiny little island called PEI and joined his team.

How important has networking been to your career?

Unequivocally, my network has been a critical driver for success in my career. That likely is the case for any young scientist. Meeting new research groups and people who look at solving problems with a different lens is so important. I learned pretty quickly that putting yourself out there was important as it opened up so many doors for me!!

For many women trying to move up the career ladder they can be met with inequality challenges. Can you give an example of a discriminatory situation and how you dealt with it or how to avoid it?

I don’t think that I would say I have faced as much discrimination as I have misogyny. There is not much to be done about that – I think this is perhaps more prevalent in the older generation, where seeing young women in successful positions, or as equals in the field, can sometimes not sit well. One example that comes to mind happened during my first PDF – I had a really interesting proposition about an immunology cell type that challenged the current dogma. I approached an older professor who was an expert in immunology to try and discuss it with him. He immediately belittled me and was extremely condescending, calling me “sweetheart”. I know that would have not been the response if I were a male PDF. It was pretty hard to not take that personally, and I was very upset as I value scientific dialogue, and I was expecting a good discussion rather than to be shut down. I think it is important that you keep focused on what is important and not take things personally but use that negativity as fuel to strengthen your resolve to excel in your career.

You are having a successful career; what’s your proudest achievement to date?

It’s all about balance, isn’t it? I think that especially for a professional woman, achieving balance with respect to your life and career can be extremely challenging. I have a lot of things I could say are proud achievements – from being awarded a prestigious federal scholarship during my PhD, to winning awards for presentations at international conferences… but I think that those things have all of a sudden paled in comparison to maintaining success while raising two beautiful babies. As women we are kind of expected to do it all! And maybe, if we want to be very successful and climb the proverbial ladder, there is some expectation that it needs to be at the expense of having a family. This isn’t said out loud, but we all know it is there in the background – how do we balance both and be competitive with men who do not have the same pressure? And how do we still maintain mental and emotional presence at home? That is the balance I’m referring to. And finding that balance has been so tough – it is an ongoing challenge – but I feel as though keeping relevant in the scientific field, leading in really exciting areas of research while still keeping a balance with what really matters at home is becoming and will be my proudest achievement. 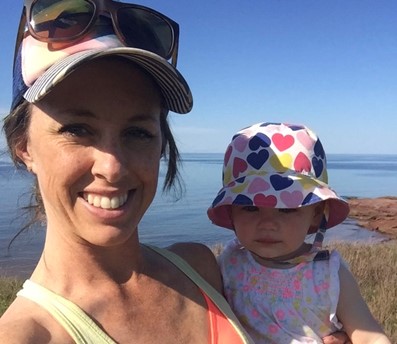 Where do you think the focus of the industry should be in the next decade?

We are in the age of big data and big innovations. Aquaculture is a relatively young industry, and the rate of growth and improvement has been exponential, but there is much left to do. Constant improvement is our mantra. We have the opportunity to leverage technological advances developed in other sectors, such as agriculture, to improve aquaculture on a fundamental scale. I think that “thinking outside the box”, and not relying on antiquated technologies when newer innovations are available will elevate the industry. There are so many “tools” in the “toolbox”, and we need to embrace all as means of achieving a common goal across the sector – producing healthy and sustainable protein.